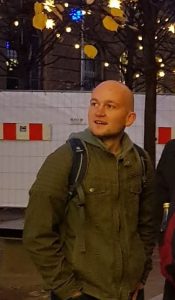 Who says that playing computer games is a sign of a misspent youth? Not when you’ve got your heart set on a career in translation! We think Malte’s got a bright future ahead of him and we’re thrilled he chose to start it with a 4-week stint as a Red Tape Translation intern.

I spent a good chunk of my childhood and youth on the internet where I played a lot of Flash games and watched even more cartoons made by English speakers, so I always had an incentive to learn English to enjoy those kinds of things more. I also just think that English sounds cool, and it has a lot of fun ways to express oneself.

Languages are probably the only thing that I am interested in, halfway decent at, and that I can actually generate income with.

I’ve always lived in Berlin, so it never occurred to me to move to any other city for training when we already have so much here.

I would like to try and get some experience in every department of what Red Tape Translation does because I am still unsure where I would like to work as a potential future translator. I am already pretty sure that I will avoid the real estate industry like the plague after trudging through property brokerage contracts this week, so getting a feel for many different industries would be nice.

Du musst den Kopf auch zum Denken benutzen, und nicht nur als Hutständer. -> You have to use your head to think sometimes, and not just as a hat rack. I like this sentence because it is a really charming way of telling someone to think without being too insulting.

I would say that I like translating and subtitling videos the most, partly because that is how I started to learn the language. I like capturing spoken words and writing them down, deciding whether or not I should include interjections, etc. It allows for more creative decisions than translating written text.

Right now I see myself as a freelance translator, but five years is a long time. Maybe I will have changed my mind in some way by then, but I will probably translate some things in some way. Ideally, I will be good enough in the other languages that I’m currently learning (French and Japanese) so that I can work with those as well, but only time will tell.