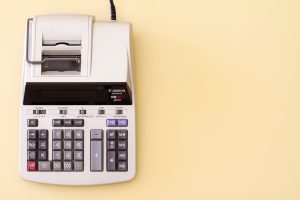 If you are tearing your hair out because you can’t find answers to really important questions about the freelance grant, legal translator Dr.Carol van Buren was kind enough to translate an article written by tax advisor Daniel Reich that appeared in gruenderlexikon.de. She’s shared a summary with us and it’s definitely worth a careful read if you just received funds from the IBB.

Dr. Carol van Buren summarized this article in English because she knew that lots of people have questions and concerns about the self-employed grants. She was aware how important it was that people understand exactly what they are for and what may happen if you fraudulently claim them or use them incorrectly.
Dr. van Buren said, “If you have already received Berlin Soforthilfe II, it can be used to cover your living expenses. However, from next week (6 April) Federal rules will apply. This means you will only be able to use the funds for your business. The IBB has updated its FAQ page to reflect this change. Should you need it, here is a link to the earlier (archived) FAQ page.”
Kathleen adds: Here is a screenshot of the section that confirmed you can use the 5,000 EUR in Landesmittel for personal expenses such as a salary or health insurance (courtesy of Dr. van Buren). 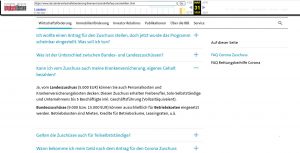 What are the requirements to apply for Soforthilfe?

First of all, a distinction must be made between emergency aid from the federal government and emergency aid from the federal states. The distinction is sometimes not easy because federal funds are also distributed through the federal states or the programs are combined.
Eligible applicants for federal funds are self-employed, freelancers and small businesses. They must carry out their work from within Germany and be registered with a German tax office. In addition, companies must have existed for a long time and should not have been in financial difficulty before the corona crisis.
The state funds are often similar, but can also differ. The requirements in the respective federal state must be checked separately. However, this can also be difficult at the moment, because a lot is still unclear due to the rapid implementation of the aid programs. Incidentally, this also applies to federal funds and of course influences all of my answers.

Can I apply for Soforthilfe II if I am still liquid, but am increasingly losing my orders?

This is still somewhat unclear at the moment. However, according to the information currently available from the federal government, it is to be assumed that a business must already be experiencing liquidity problems (Liquiditätsengpass) at the time the application is made. The applicant must confirm that the corona pandemic has caused them economic difficulties.
Dr. van Buren’s emphasis: Although funds will be transferred quickly, one should expect that this information will be checked at a later date.

How do I calculate how much my business has been affected and how can I prove it?

This is also difficult to say at the moment because it is not known what will be accepted as evidence. When applying, the only thing that needs to be assured is that a liquidity shortage (Liquiditätsengpass) has occurred. However, it can be assumed that the real figures of the company and its evaluations can be used at a later point in time to check exactly what the situation was at the time the application was made. In addition, bank statements, cash receipts and proof of current obligations, such as loan, leasing or rental contracts, can be used.
To work out whether you do, in fact, have a liquidity bottleneck (Liquiditätsengpass), you should take into consideration what operating liquid funds and, if applicable, any expected funds you have available and then subtract your existing expenses, e.g. rent / lease for your business premises, loan repayments, equipment leasing costs etc but also charges for insurance and tax consultants. If this results in a negative amount, there is a liquidity bottleneck (Liquiditätsengpass).

Am I entitled to Soforthilfe even if I am “only” part-time self-employed (nebenberuflich)?

No, Soforthilfe II is only available for people who are full time freelancers or self-employed. This means that mainly employed people with a side job as a freelancer are ineligible to apply.
Kathleen’s emphasis: your self-employment has to be your main working activity. Usually, this either means you are active in a self-employed capacity for at least 30 hours a week OR you earn MORE from your self-employed work than you do from your employed work. We don’t know what information will be required to prove this, if proof is required at all.

Do I have to use up my personal wealth before I can apply for a grant?

Can I use the grant as a solo self-employed person or freelancer to pay for private costs such as rent and groceries?

A very much discussed point, which is probably still not completely clear. However, it is becoming increasingly accepted that this is probably not the case. For instance, on Friday, the investment bank in Schleswig-Holstein, which issued the funds, said that private maintenance costs are also included in the emergency aid. The bank has since retracted this statement.
Kathleen’s emphasis: the IBB in Berlin also changed the text in their FAQs (see screenshot above and compare to the latest publication) after restructuring the grant and will be presenting it exclusively as “Bundesmittel” from 6.4.2020. This is when the new application form will be available.
If freelancers, solopreneurs and/or small business owners are also experiencing financial hardship (Liquiditätsengpass) in their private lives, basic social security (Grundsicherung) is supposed to take care of this. The application procedure for claiming ALG II has been relaxed accordingly.

How do I calculate my living expenses? Can I set a flat rate?

As already mentioned above, in most cases, living costs are not covered by Soforthilfe II.
Emphasis by Kathleen: This is the most contentious point of the whole grant. Dr. van Buren has already commented above on this above her summary/translation, and I agree with her interpretation. People who got their hands on Landesmittel (the 5,000 EUR) will probably be able to use the grant to pay for living expenses. People who apply from 6.4.2020 will only be able to use it (it will then be Bundesmittel) for business expenses.

Can I apply for both federal and state grants?

Yes, both federal and state grants can be applied for. These are usually granted side by side. Here again the special state law and also the de-minimis regulations have to be considered.

What does de-minimis mean and what do I have to consider?

De-minimis is a funding term. It means that if you apply for several grants (e.g. from the EU, from the government, from your state etc), the total combined sum of those grants must not exceed a certain amount.
In order to simplify the examination of this de-minimis regulation, a so-called de-minimis declaration must be submitted when applying for Soforthilfe. This statement must list all de-minimis aid that an entrepreneur has received over a period of time, usually the past three years.
The declaration should be made in full. Because here too, the following applies: Incorrect or incomplete information can be considered subsidy fraud.

Do grants have to be repaid?

If you received the Federal Soforthilfe II grant lawfully, you do not have to repay it. Different regulations apply to state grants. However, those who have received the grants unjustly must expect a demand for recovery. Anyone who receives the funds on the basis of incorrect information (fraud) should expect to also face criminal consequences.

Do I have to pay back subsidies if I go bankrupt within the next few weeks despite the emergency aid?

No, this is also not to be expected. Unless the funds were wrongly paid out. In this case, too, a demand to recover the funds can be expected.

Do the grants paid count towards business income?

Yes, the subsidy is recorded as business income and is taxed as such.

Are the grants tax-free and/or are they subject to Progressionsvorbehalt (i.e. will they move me into a higher tax bracket)?

The grants are neither tax-free nor subject to the progression clause. This is because the subsidy is generally taxable as business income. However, this will only take effect when the tax return for 2020 has to be submitted. So, next year at the earliest. (my emphasis) Only if a positive profit was generated in 2020 will the personal tax rate be influenced the subsidy.

Can the funds run out before the application is made?

That is hard to say. Funding can always run out before everyone has submitted their application. However, the federal funding program in particular is very generously financed, which means that it is unlikely to run out of money for the time being. Politicians are also keen to ensure that everyone who legitimately applies for funding will also receive it. The same applies to state subsidies but, of course, it cannot be entirely ruled out.

What happens if I wrongly applied for and received the grants?

As already indicated above, the funds that have been wrongly allocated can be reclaimed. If this is all that happens, you may consider yourself lucky. However, be warned – especially if the information you provided was incorrect – you should also expect to be prosecuted. I am not a lawyer, but you may face criminal proceedings for subsidy fraud or making a false oath / perjury. These are not trivial offences. Subsidy fraud in particularly serious cases can result in imprisonment of up to ten years. If the offence is considered less serious, there are prison terms of up to six months or fines.
If you wish to read the original German article: https://www.gruenderlexikon.de/news/kurz-notiert/steuerberater-beantwortet-die-wichtigsten-fragen-zur-corona-soforthilfe-fuer-selbstaendige-und-freiberufler-84233730