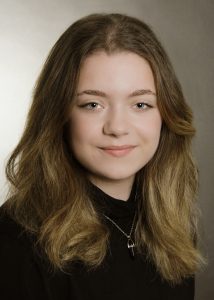 She’s a nightowl, a book worm, an unconventional problem-solver and a true Berlinerin – the first of five talented young linguaphiles spending some time with Red Tape Translation over the summer as she completes her vocational training. Welcome, Destiny!

I started enjoying English a lot more when I began watching movies and reading books in English. I felt like the feeling behind the words made a lot more sense, even though it means the same in German. It just felt a lot more personal to me. Probably because we Germans aren‘t exactly the type of people to express our feelings in an extremely colorful way. German sounds rather monotone in my ears, so I found enjoyment listening to the English language, and talking in it feels kind of freeing in that way.

My English teacher. It might sound cheesy but he inspired me to learn English and to do it by my own free will and not because it was mandatory in school. He always pushed me to get another step further until I was able to do it by myself. Then I noticed that I enjoy learning languages, especially because I believe that knowing multiple languages holds so much power and wisdom. It makes me feel great to be able to talk to people in their mother tongue, so I decided to find my passion in language learning.

I‘ve lived in Berlin my whole life and only moved to the outskirts of Berlin a few years ago.
Since Berlin is my hometown and gave me anything and everything I needed to pursue my path of starting a career in languages, I decided to stay here instead of moving somewhere else. Since the school I am attending right now allowed me to learn multiple languages, including Japanese, I had nowhere else I wanted to go.

Experience. Anything that helps me to see how someone works as a translator/interpreter. Anything that helps me to see what I am probably going to do for the next 40 to 50 years of my life and gives me the confidence that I can do that. Learning in school is great but using what you‘ve learned is even better, so I hope I‘ll be able to learn lots of new stuff but also to be able to use what I‘ve already learned beforehand.

What’s your favourite quote in your native language? Explain it to us and tell us why you like it.

“Alle Wege führen nach Rom.” probably has to be the quote I think to be the most inspiring. A literal translation would be that every path leads to Rome but what it actually means is that there are most of the time multiple ways to find a solution. I am someone who likes to “stray off the path” and do things differently because I like to find easier solutions to a problem instead of spending hours trying to understand something and wasting time while I could have just done it in a way understandable to me.

I enjoy scientific and literary translations the most. It‘s hard for me to translate texts about something I don‘t know much about since I never know how to word it properly. While reading an article, for example, I get to know the exact topic so it’s fairly easy to get the hang of it quickly, since I read a lot too, literary translations have always seemed like a fun challenge to conquer.

I hope to be able to work for the Federal Foreign Office one day. I hope I‘ll be able to travel around the world, learning more and more languages and just being able to combine work with my love for traveling.

I am someone who loves to work and study at night. I think it‘s so much more relaxing than working in the day while it‘s noisy and other people want something from you.

So if you ever want me to get something done, expect it to come in the absolute middle of the night about 80% of the time.