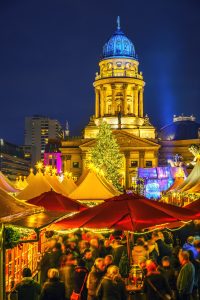 Christmas markets in Berlin officially open in late November: here are the most popular locations, the unexpected delights, their opening hours and – most importantly – what to eat and drink.

Christmas markets (Weihnachtsmärkte) have had a really rough run for the last few years in Germany’s capital. As it licks its wounds, Berlin is also eager to dip its toe gingerly back into festive season celebrations in 2022. There will be no shortage of seasonal delights: there are more than 50 Christmas markets in Berlin altogether. Here are the highlights, along with a few surprises.

Where? Bebelplatz, 10117 Berlin – not Gendarmenmarkt! Change of location due to construction.
Season: 21 November – 31 December 2022
Opening hours: Sunday-Thursday 12pm-10pm, Friday-Saturday 12pm-11pm, Christmas Eve 12pm-6pm, 25 and 26 December 12pm-10pm, New Year’s Eve 12pm-1am
Cost: Entry fee is €1, free for children between 0-12, free admission between 11am-2pm (except between December 24-31)
Highlights: These markets are usually nestled between the Konzerthaus and the stately German and French churches of Gendarmenmarkt, but for the next few years, you can gaze longingly at the Berlin State Opera house on Bebelplatz instead and wonder if you’ll ever get tickets there before they sell out. There are plenty of craftspeople offering homemade wares, all the usual food stalls and classy restaurants serving traditional food. There’s a big stage and plenty of entertainment.

Where? Charlottenburg Palace, Spandauer Damm 20, 14059 Berlin
Season: 21 November – 26 December 2022
Opening hours: Monday-Thursday 2pm-10pm, Friday-Sunday 12pm-10pm, December 25&26 12pm-8pm, closed December 24
Cost: Entry is free
Highlights: This one was cancelled during the pandemic, so Berlin was thrilled to see it back in full flight. But there’s sad news, too: 2022 will be the last year for these markets to shine. Shine is the right word, too – they uplight the castle in glorious rainbow colours. It is particularly popular with kids thanks to the rides set up near the Orangerie.

Where? Alexanderplatz, 10178 Berlin
Season: 21 November – 26 December 2022
Opening hours: Daily from 10am-10pm, December 24 from 10am-4pm
Cost: Entry is free
Highlights: Along with the traditional market stalls, there is an enormous Christmas pyramid, plenty of entertainment, rides galore (but heed my warning below), an ice rink, and a wooden hut for parties.

Tip: Don’t do what Kathleen did and go on the chair swing ride near Alexa way above the rooftops after one too many mulled wines wearing thin stockings and a knee-length denim skirt when it’s negative seventeen degrees. (Frostbite symptoms for a week).

Where? Kulturbrauerei, Schönhauser Allee 36, 10435 Berlin
Season: 21 November – 22 December 2022
Opening hours: Monday-Friday 3pm-10pm, Saturday-Sunday 12pm-10pm
Cost: Entry is free
Highlights: Kulturbrauerei is a charming venue with loads of Scandinavian-themed food, drinks, crafts and kids’ activities. Santa Claus visits every day for the kids. Check out the cool art installation warmed by a wood-fired oven. This is not a big venue and it can get very crowded in peak times. If you’re a parent, think twice about taking your children in a pram.

Bonus: here’s a promotional video that Kathleen was in about 6 years ago at Lucia Christmas markets. Spot the cameo! (Some serious crepe eating going on there).

Where? Potsdamer Platz, 10785 Berlin
Season: Winterworld: October 28 2022 – January 1 2023 Christmas Market: November 25 – December 26 2022
Opening hours: Winterworld: 11am-10pm, December 24 until 2pm, Closed 14 November and 22 November. Christmas Market: 10am-10pm, December 24 10am-4pm
Cost: Entry is free but toboggan runs are €1.50 (and if you have kids, they’re hard to miss).
Highlights: The enormous toboggan run is the big highlight, along with crafts, food and drinks galore. Unfortunately, the virus-that-shall-not-be-named means there is no ice rink or curling this year. Sad face.

What to eat and drink

Christmas markets are diversifying, as is the cuisine on offer, but there are a few delightful traditional European goodies that will make your eyes light up.

If you want more pearls of wisdom on ways you can live your best German life, do join our newsletter. It’s free, released on a fortnightly basis and we do a pretty good job at making dry topics as entertaining as possible.

Here’s a peek at our visit to the Bebelplatz (usually Gendarmenmarkt) Weihnachtsmarkt.
🎄