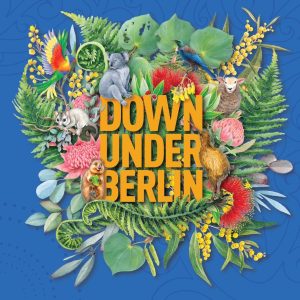 Down Under Berlin has risen like a phoenix after a couple of years of setbacks thanks to the virus-that-shall-not-be-named. I personally am hanging out to see Nude Tuesday and some spectacular Aussie short films. I need an urgent hit of antipodean culture and humour.

Moviemento Kino in Kreuzberg will be buzzing with curious antipodean accents and fascinating theatre folk between 21-23 October this year. Down Under Berlin is back, live and in-person under the capable hands of the Aussie dream team Mala Ghedia and Angus McGruther for the first time.

Mala Ghedia‘s work as a director already left my jaw on the floor when I saw her short film Ricochet a couple of years back (spoiler – it’s making an appearance in the Aussie shorts and I wouldn’t miss it for the world). I’m also very familiar with Angus‘ work from the pair’s dynamic podcast Ozländer – interviews with captivating Aussies making their mark in Germany’s capital city.

This year’s film festival theme is a journey back to our true roots, something that pulls on my heartstrings in particular, as for many festival enthusiasts including myself, travel back to our roots was physically impossible and is just starting to become a reality again (love you, Mum and Dad).

The Australian feature Blueback opens the festival with an inspiring story of a girl fighting to protect the ocean from overfishing. The witty New Zealand comedy Nude Tuesday explores the “revealing” nature of our closest relationships in their most natural state.

The short film section includes They Saw The Sun First, Australian filmmaker Stefan Hunt’s BAFTA-winning short on aging. Disrupt by New Zealand’s own Jennifer Ward-Lealand reveals a young man lost who turns to his roots for answers. I’ll Be Frank is documentary maker Aaron Lucas’ personal family journey, touching on his German grandfather’s flee from Nazi persecution. Late indigenous actor David Gulpilil’s performance in My Name Is Gulpilil reveals both his personal battle with illness and his own life’s reflections.

Peruse the programme and you’re bound to find something to satisfy the craving to return to your roots, even if a plane trip is still out of the question for the foreseeable future. Or take the hand of an Aussie or Kiwi for which you harbour fond feelings and lead them gently into the auditorium as a special surprise. And if you see me there, come say hi!