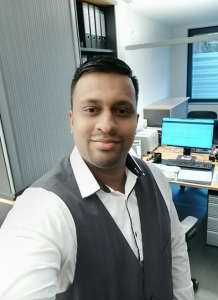 “Love attracted me to the German language.” We were on the edge of our seats listening to Yadhu talk about his life. He is clearly a master of words, in whichever languages he chooses to communicate. We are thrilled to have him on the team for the summer!

What attracted you to the German language?

Love attracted me to the German language.

Learning German or attempting to learn German was an accident for me. I learned the German language because I fell in love with a German woman and she later became my wife. When I moved to Germany I never expected that the German language would become an important part of my life. Now my daily life, school, and future career all depend on my German knowledge. It is getting better and I am becoming more fluent every day. German is still a challenging language more me, but I am trying my best to counter the language.

I found my love in Berlin, my family is in Berlin and it is always interesting to live and train in a dynamic and international hotspot like Berlin. I can connect with many contacts from within and outside of the country.

A strong and good foundation for completing translations as well as interpreting experience and maybe some marketing basics. I want to learn as much as possible from the experts at Red Tape Translation and have a bright career in languages.

English: If you wanna gain something in life you have to lose something.

I wake up every day at 3 am to study. I lose sleep so that I can study more and learn more.

I like to translate film dialogues because I have been doing it since I was a child. I try to translate movie dialogues into my mother tongue – Malayalam.

That is a difficult question to answer. I am not afraid to dream big. I know I am not perfect, and as a foreigner, German is always a challenge for me even after 2 years. First, I need to learn everything possible to pursue a career in languages.  I’d like to see myself as an interpreter or as a subtitler in five years. Since I also learn Spanish and Korean, I hope I will get a chance to use all my language skills in my work life.