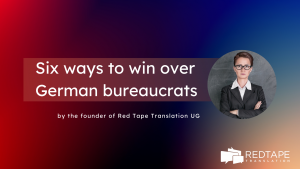 It’s taken me years, but I’ve finally unlocked the secrets to winning over German bureaucrats, and I’m here to share six of them with you.

I will always remember the day I officially “started” Red Tape Translation. It was one of the scariest and most rewarding days of my life. I knew I wanted to help people and win over the German case workers, but I wasn’t sure how to get started. So I woke up at 4am and took the train to the Ausländerbehörde (now called the Landesamt für Einwanderung) in Berlin on Friedrich-Krause-Ufer. As usual, there was a huge line of people shivering and squirming. I walked to the front of the line, turned to face the crowd, took a deep breath and said in a very loud voice “does anyone need help in English?”

About 10 hands shot in the air and I got to know a few of my first “customers”. When the security guards opened the doors, it was a stampede – people charged in like it was Black Friday.

But the stream dissipated into different directions as people made a beeline for either the right room or the waiting number machine. And the ones who hesitated … well, they had to wait the better part of a whole day to be seen.

Lesson 1: Know exactly where you need to go 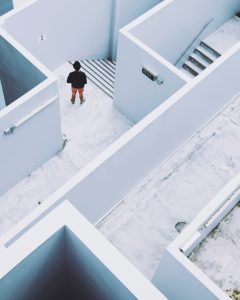 The right building, department, floor, waiting room. It’s not easy to find out where you’re supposed to be. If you’re going it alone, you should arrive extra early and use the time to find the right floor and the right waiting room. If you’re even a little bit late arriving at your waiting room, your number might have already disappeared off the board and they won’t bring it up again. Non-attendance at a foreigner’s office appointment can create a whole bunch of really serious problems, especially if your tourist time in the Schengen area has already expired.

This is why I’ve trained my Red Tape interpreters to know the buildings inside out. We arrive 15 minutes early for a really good reason – so that we can make sure everyone is where they need to be at the right time.

I will not forget the head case worker that day. After seeing me in her office for the third time that day, she took me aside and said, rather abruptly, “What do you think you’re doing?”

I had the impression I was going to get in trouble. She could have told me to leave. I wondered briefly what to say. Then the words tumbled out… “I’m trying to start a business and I’ve come here to help people for free to find out how it all works.” And her whole attitude shifted, the ice melted, and she told me exactly what I needed to do to make it work. And then she said “actually, it would be great if you could stay, because this woman in my office clearly did not understand what my colleague told her last time. Please come with me.”

While many are terrified of the German case workers, they are people trying to do their job, and it’s a demanding job, they have too much to do and too little time, and you might also say that they’re not adequately compensated – they can come across as gruff, or hostile at time…being honest and genuine goes a long way. They really appreciate applicants who are actually trying to do their best and make the case worker’s job as easy as possible, for example by bringing a German translator or submitting a complete application that’s prepared correctly.

Lesson 3: It feels good to give help – and get it!

I left that day positively radiating. It felt so good, the clients were so grateful and my contribution had made such a positive difference.

I also got a kick out of the elation felt by my “new clients” – instead of having a terrible or traumatic experience, they were confident, they left on a high – and dare I say – they even found it fun in the waiting room and watching me take care of the communication for them. 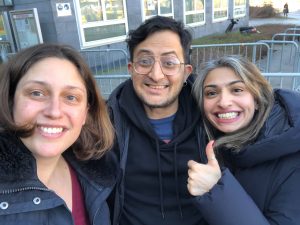 Over the years, I’ve added some handy tricks to my arsenal to smooth things over with German bureaucrats. There’s often a firm barrier at the beginning of the conversation, but there are ways to dissolve it. And it’s such a joy when it actually works – yes, it is possible to leave that place with a smile on your face.

Alright, not always, but the cat calendar is symbolic of the personal touch in the case worker’s office. It might be a collector’s lego on a shelf, a picture drawn by a 4-year-old, a travel destination calendar, or an inspirational quote. Noticing it is a great way to build rapport and break the ice.

Lesson 5: “No doesn’t always mean no”

I’m specifically talking about your dealings with German bureaucracy, here. Don’t apply this little gem to your personal interactions, please. My experience is that when you ask someone in a public office to do something that they don’t HAVE to do but COULD do to help you, the default answer is often no. Or “ungern”, which is my least favourite German word and means “I could but I don’t want to so I am basically saying no”. But if you push gently, the no can often be turned into a yes. This brings me to my last lesson:

I just love it because it is so effective. It means “as an exception to the rule” and it’s kind of like you’re the pigeon in a Mo Willems book saying “pleeeeeeeeeeeeease?” Maybe it’s because it’s such a nice word, or maybe because it reminds case workers of their power to make or break your day and that makes them feel good, but if I end a request with “ausnahmsweise”, more often than not, they’ll say yes.

Take ten years’ worth of lessons learned and experienced gained to a German public office near you – we’ve made the mistakes so you don’t have to.