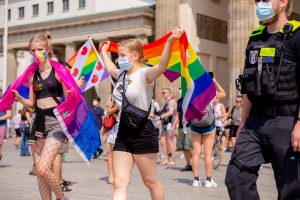 Germany not only celebrates Pride, but also its own European version known as Christopher Street Day (CSD).

Although most Pride Month celebrations happen in June, Germany (and Switzerland) celebrate another special day in July: CSD or Christopher Street Day. Christopher Street Day is a day to remember the Stonewall Riots. It was the first LGBTQ+ community uprising against police assaults that occurred at a bar in Manhattan in 1969. Since 1970 onward, parades and marches with various names evolved in the US to what we know today as Gay Pride. Germany stuck with Christopher Street Day and held its first celebration in 1970 in Berlin – natürlich!