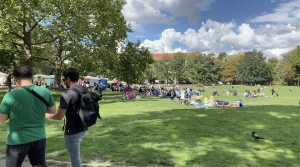 Have you had the new and improved Thai Park experience in Berlin?

Preußen Park is a beautiful, large park in Wilmersdorf, with a delicious history of Thai street food: from April to October each year, the park becomes home to a giant outdoor street-food market, with vendors selling their best Thai dishes to a hungry crowd. In the past the market was pretty much unregulated. Basically a bunch of cooks and vendors just set up shop on picnic blankets across the grassy field and casually sold their ridiculously good food to whomever happen to come to the park that day.

And while there were some advantages to this – for example, on sunny day I could just walk to the park and get lunch with my friends from German class without any pre-planning – the general lack of organization also ended up being problematic…especially when it came to trash and litter. Seeing as Berliners aren’t exactly known for attending to cleanliness, even when forced (!), you can imagine the state the park was left in at the end of the day. 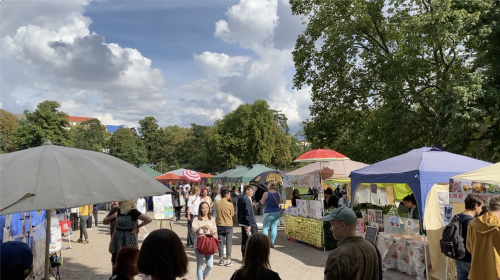 When I heard through the grapevine that Thai Park had been through some bureaucratic changes post-pandemic, I had to check it out for myself. (Well, that plus it was a good excuse to go eat Thai food.) This was my first time back at the park since its glow-up and I decided to bring along two first-timers. What we experienced was impressive…

First off, all the picnic blanket vendors have now evolved into actual stands. And instead of being spread all over the park, they’re lined up in rows – like a little food court. So organized!

Each stand has photos of all of the dishes served, including the prices and even allergens. Another new cool feature is their Pfand system. Instead of disposable plates, you can get reusable plastic ones from each stand, as well as biodegradable cutlery. Once you’re done eating you just return it to the same stand and get your two or three Euros back. Not only do you have Pfand helping against litter, but there are also plenty of trash and recycling bins in the area.

What I also love is, along with the many choices of food to eat now, some stands also have food you can buy and take home. My gluten-free heart is still happy noshing on the package of chewy coconut milk mochi desserts I snagged before leaving. 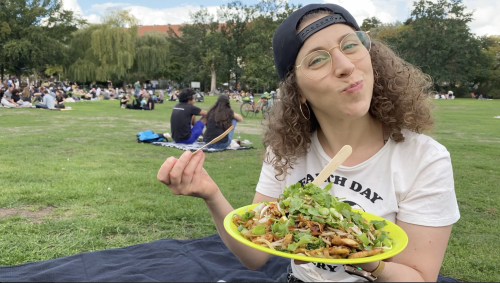 Check out Thai Park Berlin for yourself

Our verdict? Grab your blanket and head there soon. The market’s open from Friday to Sunday, 10:00 to 20:00, but ends in October. After that, you’ll need to wait until April to enjoy this foodie treasure trove. So enjoy the last of the Berlin sun while you can: stock up on that vitamin D, and eat some amazing, authentic Thai food from some of the best, and kindest, vendors in the city.

Here’s a short video I made to show you what to expect:

Have you been to Thai Park? If so, what did you think? Let us know in the comments below.

And, lastly, for anyone who’s craving a different kind of food – perhaps more German cuisine – there’s always Oktoberfest in Berlin for you to dust off your Dirndl and get some bratwurst! That’s Berlin, alright…living up to its multi-culti name, one food festival at a time. 🙂