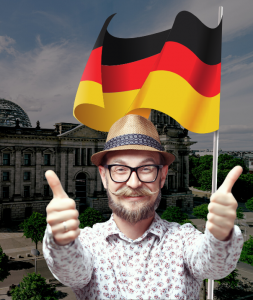 We expect German bureaucracy to keep us on our toes in 2023. Can we expect the long-awaited citizenship reform to become a reality? Will medical matters finally go digital? Is cheap train travel really here to stay? Here’s what we anticipate from German red tape next year.

We all remember the 9 Euro ticket fondly. The nationwide public transport ticket is set to come back in January with a higher but still delightfully affordable price tag of 49 EUR per month. They’re calling it the Deutschlandticket. No playing the dumb tourist card though: use it on regional trains, buses and trams across the country, but not on the fast trains (ICE).

The Berlin Senate has now announced that the 29 Euro ticket for local public transport will be available at least until the 31st March.

Effective January 1st, we welcome the eAU (is it pronounced “ewwwww!” or “yyoooww!“? You decide). This electronic medical certificate will replace the yellow piece of paper you’ve come to know and love. There’s not too much to do as a patient, though, the change mainly affects doctors and health insurance companies.

Germany intends to allow dual citizenship with no limitations in 2023. Are you as excited as I am? This was initially planned for 2022, but the wheel is slow-moving, as we know. Under current legislation, German only allows multiple citizenships in special cases. Parliament (Bundestag) will debate this law further in December. We can expect new German citizenship rules in force by July 2023.

The plan has received criticism from the political party Die Grüne that the very wealthy will benefit the most from the tax relief, rather than people with lower incomes.

You might know it as welfare, the dole, ALGII or Hartz IV. From 1 January 2023 onwards, call it Bürgergeld.

Base monthly payment rates are set to increase from 449 to 502 euros for adults, but we’re awaiting a final vote on the numbers. If eligible to receive Bürgergeld, citizens should receive it for two years regardless of age, unless their assets exceed 60,000 Euros.

The political parties FDP and CSU, along with other employee representatives aren’t convinced – they think it will increase unemployment rates, offer fewer incentives for people to take up work and create labour market shortages.

We will see food and drinks encased in reusable packaging, including sized cups, from January 1st 2023 in German cafes, bistros and restaurants. Establishments are not allowed to make reusable packaging cost more than single-use packaging, but they can ask for a deposit that gets returned to the customer when the packaging comes back. The new rules don’t affect kiosks, snack bars or Spätis, though.

Will you be lining up at the Einbürgerungsamt to stake your claim to German citizenship next year? Will you hop on a regional train and make your way through all the Federal States on a shoestring? Leave a comment and let us know how you think 2023 will play out.

PS. If you want pearls of wisdom on German ways to drip feed into your life on a fortnightly basis, do join our newsletter. It’s free and we do a pretty good job at making dry topics as entertaining as possible.